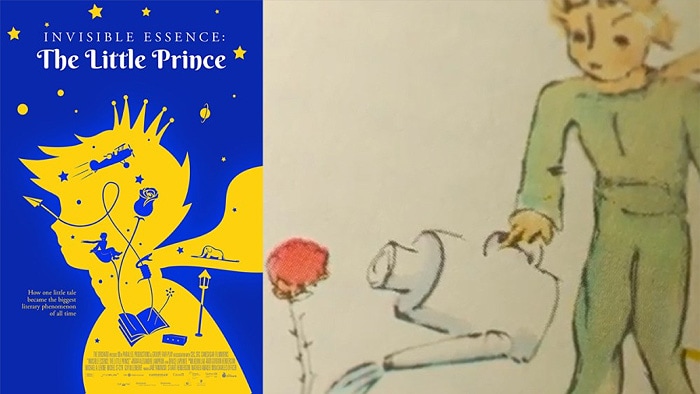 Invisible Essence: The Little Prince (Film) directed by Charles Officer, distributed by The Orchard (Sony Music) had its US release October 16, 2018 and can now be viewed on Netflix. This insightful documentary features segments from the Grammy Award-Winning "Best Children's Recording" The Little Prince Narrated by Richard Burton. The illuminating feature length motion picture takes audiences on a journey into the life of author Antoine de Saint-Exupéry, and through the failing eyesight of a young boy learning to read the book in braille, we discover a deeper meaning of Antoine de Saint-Exupéry’s prolific words "what is essential is invisible to the eye”

The brilliantly crafted film uses illustrations from The Little Prince (#1 best selling book in the world with 200+ Million copies sold), along with in-depth commentary by Saint-Exupéry family members, clips from the Mark Osborne 2015 Chloe Award-winning animation, dance sequences from the Canadian Ballet, clips from the Paramount Pictures 1974 live-action musical and a beautifully orchestrated score by composer Kevin Lau. Set for a limited theatrical release in the USA the film can be streamed on iTunes, Amazon, Google Play, and the album The Little Prince Narrated by Richard Burton can be downloaded on iTunes.

About the Story: The poignant, life-and-death odyssey offers timeless lessons when The Little Prince miraculously appears in the Sahara Desert and tells a downed Aviator of his love for a Rose – the one (and only) flower on his distant Asteroid... While attempting to repair his airplane, the Aviator patiently listens to stories about the very strange “grown-ups” encountered by The Little Prince on his interplanetary journey to Earth. Disillusioned and confused by his conversations with “grown-ups” The Little Prince is comforted when he tames a Desert Fox who confides in him that: "It is only with the heart that one can see rightly; what is essential is invisible to the eye.”

About the Album: In addition to Richard Burton (who plays the Aviator) the album also features Jonathan Winters (as the King & the Snake), John Carradine (as the Fox, Geographer & Conceited Man), Jim Backus (as the Businessman, Tippler & Railway Switchman), Claudine Longet (as the Flower), Mark Conrad (as the Lamplighter), and Billy Simpson (as “The Little Prince”)

“The Little Prince Narrated by Richard Burton, based on the original 1943 Katherine Woods (English) translation, is the most beloved and celebrated recording of the Antoine de Saint-Exupéry classic story and I am honored that the producer’s of INVISIBLE ESSENCE: The Little Prince chose to work with me as Associate Producer of the film and include excerpts from this audio recording in their inspirational and heartfelt documentary” …Richard D. Kaye

…and enjoy this timeless classic with your loved ones!